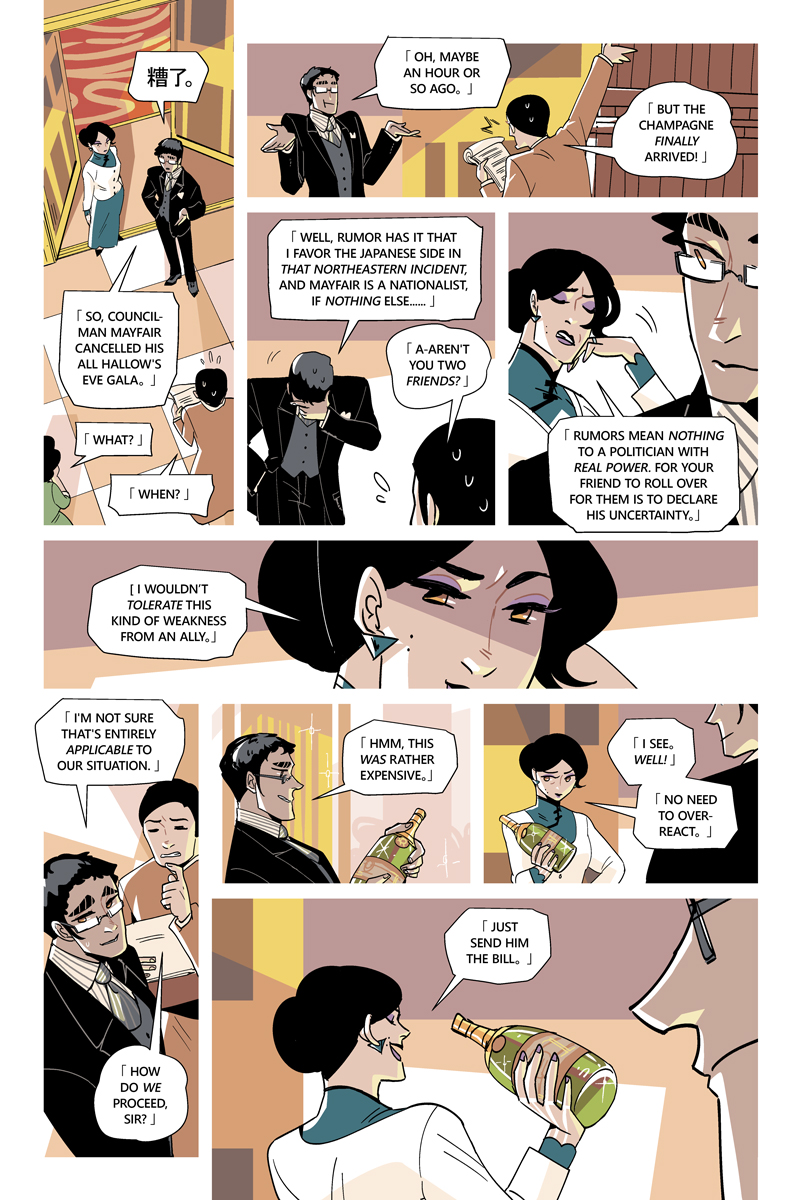 Hey, everyone. Color will be up later today. I'll probably add some relevant notes on the historical background here, too, since I know a lot of readers are from the US, and we tend to gloss over pre-WWII Asia in history classes. :'D Good night~!

At the time, Japan was industrializing and wanted to be an empire like the western countries that were in power at the time, such as Britain and France, which were two of the few nations who kept sizable colonies after WWI. To be an empire, you need resources and colonies. What was the nearest resource-rich continent nearby? China!

We'll get to the 1st Sino-Japanese War later in this chapter.

Now, the 2nd Sino-Japanese War doesn't blow up until 1937, and it literally continues into WWII, which is why China and Japan were on opposites of the war. Prior to 1937, there were little skirmishes here and there that led to Japan slowly taking more territory in northeastern China. The first major incident, mentioned on this page, happened in the area currently know as Dongbei. It's called the Mukden Incident, and it happened a month prior to where the story is in the Helen at the moment. The Japanese government used this incident as an excuse to invade Dongbei, which was known as "Manchuria" at the time, and under Japanese rule, it became "Manchukuo."

And that is where we are in the story in SfR and where this chapter lies in world history. If that's cool with you, no need to read further because the rest of this post is kind of stuff I think about from time to time that isn't necessarily related.

(Trivia: Ru's grandparents lived there during Japanese rule. It was horrible. Lots of war crimes were committed on par with the Nazi regime's in Europe, crimes that the Japanese government never really apologized for in a way that satisfied the Chinese government. This, and everything I mentioned above (and more) is why Japan and China are on terrible terms. I'm under the impression it's worse than the Russo-American relationship after the Cold War, but I'm Chinese-American.

A lot of Chinese education teaches Chinese kids to distrust the Japanese as a general rule, and a lot of Japanese education teaches Japanese kids that their previous government and military weren't really THAT cruel. And some of that even carries into the Asian communities in the west. It's a problem, of course, because it's also a conundrum of "should younger generations bear the grudge into the future?" vs. "you can't forgive trauma like this or else history repeats."

As a final note, this is also why I ask that you never rapid-fire "Where are you from? China? Japan? Korea? etc." to Asian strangers as a sort of casual conversation thing. Not only is it insensitive to our cultures and annoying, it's really uncomfortable because of our histories.)